Emma* had no idea where she would end up when she attended DIU in 2004. She only knew that God had called her to pursue Bible translation, and she said yes. As Emma pursued a certificate in Applied Linguistics, she connected with Wycliffe members who encouraged an interest in Southeast Asia where she connected with the Mountain People*. 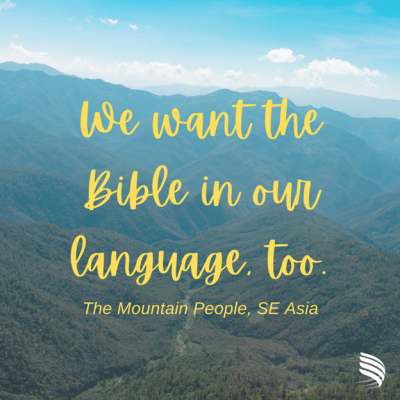 The Mountain People in Southeast Asia are largely resistant to the Gospel. However, nearly a hundred years ago, a group of them heard the Gospel for the first time, and while there were no educated pastors, the truth of the Gospel prevailed. No schools had been in the area until a few years ago, and education had to be outsourced. Recently, several young people attended a Bible school in another city and became the oldest educated people in their community. One day, their pastor and another leader came to find Emma and her team to share an urgent message.

“We want the Bible in our language, too” they told her. “Other communities have it in their language. We want it, too.” Emma tells us that only God could have put this together, and in response, her team got to work in 2011 with literacy and translation with these young men as some of their first mother tongue translators (MTTs).

The project was challenging from the get-go. Because of the difficulty in reaching the Mountain People, the project has always been a remote work situation. Then, two Mountain People villages experienced massive landslides right after the literacy program began, which created more challenges. The local government forced relocation from the hillside to another location. As a result, the literacy efforts came to a halt. In the meantime, translation efforts began to grow.

Emma’s team began translation drafts of several New Testament books. They developed scripture recordings and created a scripture app so that community members could listen to God’s Word. The translation team then began training church leaders to review the translations. They started with the Gospel of Luke, and God began to move in remarkable ways.
During this reviewing session in which an MTT read the text aloud for the benefit of the majority who were not yet literate, the light came on. Leaders began to speak up. “We have this Bible translation, but nobody can read it … We need more literacy! We need you to send us teachers!” The very presence of God’s word stirred their hearts. The people became motivated for literacy and selected teachers to receive training. “Sometimes, the timing is not our timing,” Emma told us. “They have to decide that they want this for themselves.”

In 2019, Emma moved back to the United States due to health issues. She continues to assist with the translation and literacy efforts remotely from home. “There are a lot of pieces that still aren’t in place in this transition,” she said. Emma asks for prayer for herself during this season as she seeks wisdom, adjusts to her new surroundings, continues partnership development, and connects to community here while still staying connected to the Mountain People, especially in the midst of a pandemic.

Despite the distance and the challenges of the pandemic, the work is thriving. Even with the Mountain People’s region closed, the people initiated literacy classes on their own in the village. Initially, 90 kids showed up to learn, and the literacy efforts still continue. Emma marvels at the way God moves, saying, “I’m not there asking them to do it. God can make things happen when He wants to.” Emma asks that we pray for this momentum to grow.

Along with the literacy work, translation continues. Right now the Mountain People MTTs are working through translating biblical key terms such as “priest.” Initially, they were using words borrowed from the national language — words whose meanings did not relate culturally to them. In the end, they chose a phrase that means “a person who communicates between God and man” because this concept exists in their language. Pray for the team to produce clear translations with key terms that reach people’s hearts. Pray also that the MTT team will grow, that the translation process will engage the elders of the community, and that their hearts will be pricked for the Gospel. Also, pray for the Mountain People to be transformed through the power of God’s word. 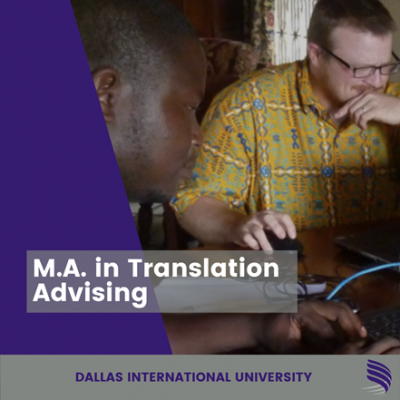 Master of Arts in Translation Advising

We’re almost ready to launch, and you’re invited to join us!

Our new Master of Arts in Translation Advising (MA-TA) is built for people like Emma. It provides individuals with knowledge and skills to contribute to the advancement of Bible translation as project facilitators.

The MA-TA degree provides instruction in biblical languages and culture and guides the student through the topics of translation, linguistics, and multicultural issues at both a theoretical and practical level.

To give toward the establishment of this and other programs, visit http://tinyurl.com/DIU2021.

We are blown away! In a matter of just one month, you have helped us raise over $8,000 of the matching funds for the Helping Hands Scholarship! This scholarship will assist students whose critical financial needs could hinder their ability to enroll in or complete their degree programs for cross-cultural service. Thank you for helping to make this a reality.

If you would like to be part of this matching fund, you can visit https://tinyurl.com/helpinghandsDIU.